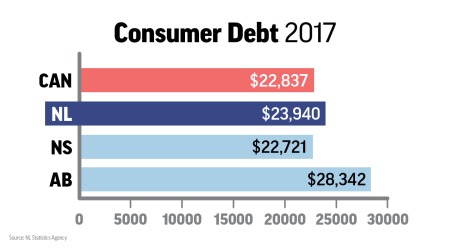 In 2017 consumer debt in NL was slightly higher than the national average. Consumer debt excludes mortgages and home equity lines of credit.

Over the past ten years both consumer and business bankruptcies have decreased by 35% and 49% respectively. Source: NL Statistics Agency 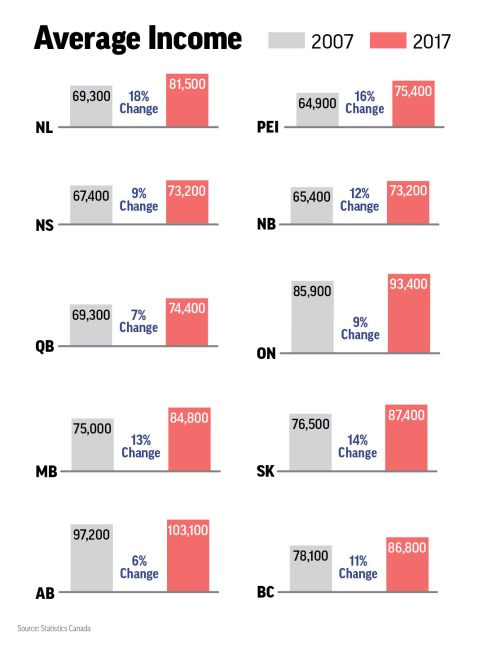 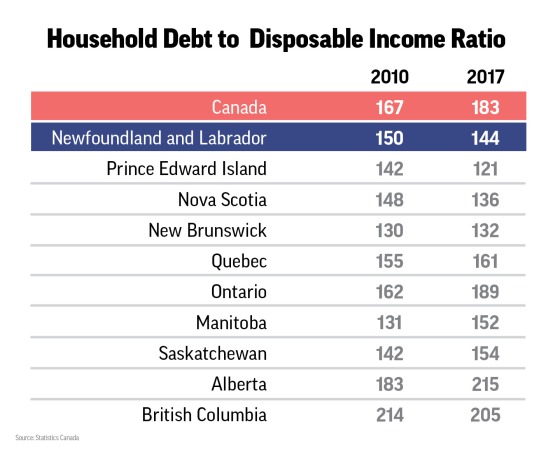 In 2017, NL household debt to disposable income ratio was 144 (or $1.44 of debt for every $1 of disposable income in a household), significantly lower than the Canadian average ($1.83 of debt for every $1 of disposable income) and the fourth lowest amongst the provinces (though highest among the Atlantic provinces). The ratio has decreased from 150 in 2010, compared to the Canadian average which has increased from 167. Household debt refers to the sum of total financial liabilities including credit, mortgage and non-mortgage loans, etc.
Source: Statistics Canada

Nearly 68,000 NLers live in poverty: 44,070 of them live in families and 23,655 of them are single people not living in economic families. Couple-based families have a lower incidence of living in poverty, while lone-parent families, especially families with single mothers, have a higher incidence of living in poverty. Market Basket Measure refers to the measure of low income based on the cost of a specific basket of goods and services representing a modest, basic standard of living. Source: Statistics Canada

The average number of people receiving income support has decreased over the past eight years. Source: NL Statistics Agency

The Bonavista Peninsula has long been a prime tourist destination in the province.
With anchor businesses and organizations, like the Trinity Historical Society
and Rising Tide Theatre, as well as newer initiatives, such as Bonavista Living and
Bonavista Creative, the area is leading the way when it comes to capitalizing on creative
and cultural economic opportunities becoming a hotspot for innovative entrepreneurs.
Moving beyond craft shops and B&Bs, over the last few years newcomers and locals alike have been opening cafes, breweries, food trucks, and eco-tourism operations all over the peninsula.